In the first post of this series, I likened the task of biblical interpretation to the work of a detective meticulously searching for clues and evidence. When it comes to the Bible, I noted that exploring introductory matters can greatly help us in our interpretation just as a composite sketch of a suspect can help a detective solve a crime. In sketching the background of Hebrews, I’d like to draw our attention to several important clues left in the book regarding the identity of the author, the central message of the book, and the identity of the readers. In this post, we’ll be focusing our attention on the central message of the book.

What Is the Message?

(4) The next clue I want us to look at is foundational to the message of the book and also has an important bearing on the date of composition. I’m referring to the lack of mention of the destruction of the Jerusalem Temple, which took place in 70 AD. In this case, our clue is the fact that something is not mentioned that, if it had already occurred, almost certainly would have been mentioned because it was vitally important. It’s hard to overstate the importance of the temple’s destruction for first-century Jews. It was built by Solomon, the son of David, and later destroyed by the Babylonians but subsequently rebuilt—the Second Temple. Then, in Jesus’ day, Herod the Great and his successors embarked on a major reconstruction of the Temple, which was not completed until the early 60s AD, ironically only a few short years before the Romans marched into Jerusalem and razed the Temple to the ground, in keeping with Jesus’ prediction that not one stone would be left on another (Matt 24:2). Now the Jews were without a place for offering the sacrifices required by OT law.

The major argument of Hebrews revolves around the fact that Jesus brought a once-for-all sacrifice by giving his life for us on the cross, so that there no longer remains a need for the OT sacrificial system. He was the great high priest who entered behind the curtain once for all to represent us before God and to open a new and living way, so we can approach God directly and with confidence because of Jesus’ blood. Now if the destruction of the Temple had already occurred, it would have greatly helped the author’s argument to mention that event. All he would have needed to say is, “Look! We can no longer bring those sacrifices required by the OT law anyway because the Temple is in ruins. But no problem, we don’t need to, because Jesus died for sins once for all!” That would have been a very powerful argument. But as we read the book, we look in vain for any references to the destruction of the Temple. It seems reasonable, therefore, to infer that, just like the dog who didn’t bark in The Adventure of Silver Blaze, when the letter to the Hebrews was composed, the Temple was still standing, which places the date of the book to the years prior to 70 AD.

(5) What kind of book is Hebrews? You’re saying, “The book of Hebrews is obviously a letter.” Well, not so fast! Let’s first investigate. As we look for clues, we notice immediately that the book is different from most other NT letters which open something like this: “Paul, … an apostle of Christ Jesus, to the church of God that is in Corinth. … Grace to you and peace from God our Father and the Lord Jesus Christ” (1 Cor 1:1–3).

Now, look at the opening of Hebrews, and you’ll notice that the book begins nothing like that. By contrast, it begins with a rhetorically polished introduction that is more reminiscent of an oral message (a sermon) than a written epistle. It’s hard to see that in English translation, but in the original Greek, the letter starts out with a series of alliterated words. Specifically, verse 1 features as many as 5 words starting with the Greek letter pi (English “p”): Polymeros kai polytropos palai ho theos lalesas tois patrasin en tois prophetais (“Long ago, at many times and in many ways, God spoke to our fathers by the prophets”).

Add to this the fact that toward the end of the letter, the author calls his  composition a “word of exhortation” (13:23), which in its only other NT occurrence, Acts 13:15, refers to an oral address or sermon Paul gave at a local synagogue in Pisidian Antioch, not to mention that the letter is pervaded by references to “speaking” and “hearing” rather than “writing” and “reading.” For all these reasons, the conclusion seems well founded that the letter originated in a series of oral messages.

Now let’s talk a little bit more about this. If Hebrews originated as a series of sermons, what were those messages about? What are the clues the author has left for us to discern the structure of the book? In a nutshell, I believe we can see that there are 3 major sections in the letter that may correspond to 3 original sermons. In each case, there is an opening assertion which is followed by a powerful exhortation addressed to the readers: 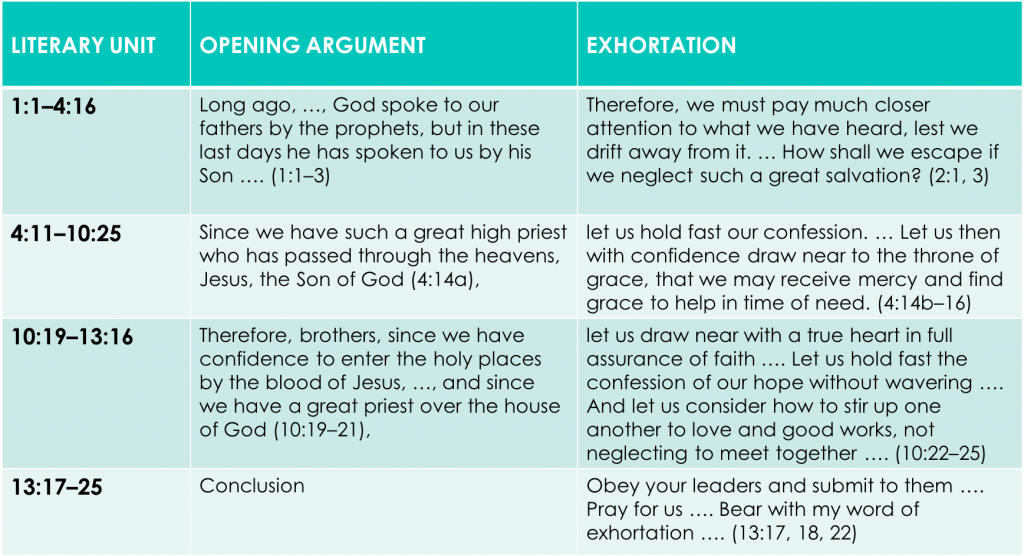 So when it comes to the text, we know that it was written by an unknown, male, second-generation, anonymous author prior to the destruction of the Temple in AD 70 and most likely originated as a series of sermons (possibly 3 messages) in which the author asserted that God in these last days revealed himself through Jesus his Son and that Jesus was the great high priest who brought a once-for-all sacrifice for us so we can draw near to God with confidence.