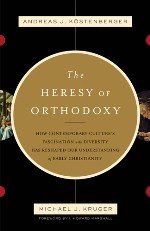 In recent years, scholars have increasingly proposed that early Christianity was not unified but diverse. Is this borne out by historical fact? How diverse was early Christianity? And if diverse, did such diversity extend only to the personal style and theological emphasis of a given New Testament writer or is it possible to speak of doctrinal diversity in the early church, to the extent that there were in fact multiple Christianities? Did what we today consider historic and traditional Christianity only emerge in the second and subsequent centuries as a set of beliefs imposed by the ecclesiastical hierarchy onto all Christians?

We discuss this topic (the so-called “Bauer-Ehrman thesis”) in our book The Heresy of Orthodoxy. The following summary and chronological timeline summarizes our main findings in that book, particularly chapter 2.

Early Orthodoxy as the Standard for Later Heresies

In short, although the late first and early second century gave birth to a variety of heretical movements, the set of Christological core beliefs known as orthodoxy was considerably earlier, more widespread, and more prevalent than advocates of multiple early Christianities suggest. [tweet_box design=”box_01″ float=”none”]The proponents of second-century orthodoxy were not innovators but mere conduits of the orthodox theology espoused already in the New Testament period.[/tweet_box] The following timeline will help summarize and clarify the relationship between orthodoxy and heresy in the patristic period.

The timeline shows that heresy arose after orthodoxy and did not command the degree of influence in the late first and early second century that proponents of multiple Christianities claim. Moreover, the orthodoxy established by the third- and fourth-century creeds stands in direct continuity with the teachings of the orthodox writers of the previous two centuries. In essence, when orthodoxy and heresy are compared in terms of their genesis and chronology, it is evident that orthodoxy did not emerge from a heretical morass; instead, heresy grew parasitically out of an already established orthodoxy. And while the church continued to set forth its doctrinal beliefs in a variety of creedal formulations, the DNA of orthodoxy remained essentially unchanged.