The Self-Attestation of Scripture

In my previous post, I outlined 5 postures we can take toward the Bible and the Christian faith (skeptical, suspicious, critical, discerning, naïve). In this context, we should also consider Scripture’s self-attestation. Not only does the OT reveal a high view toward Scripture (Psalm 19; 119), Jesus had a high view of Scripture as well. He said that Scripture “cannot be broken” and often cited it in support of his argument. Paul wrote that Scripture is God-breathed or inspired (2 Tim 3:16-17), and Peter said that God moved men to write Scripture (2 Pet 1:19-21). So, we have good reason to believe that God superintended both the process and the product of Scripture.

To begin with, let me say a word about so-called “contradictions.” We should not jump to conclusions that an alleged error is an actual error but be open to harmonization. For example, scholars speak of the “Synoptic problem,” that is, the fact that the biblical Gospels of Matthew, Mark, and Luke at times vary in details of their presentation. But I submit this is surely a rather prejudiced way of putting things. Multiple witnesses are a strong asset, not a liability. Deuteronomy requires a minimum of 2 or 3 witnesses; we have 4 Gospels! And we have 500+ witnesses to the resurrection.

Parallel Accounts in the Synoptic Gospels

Let’s now look at a case study of an alleged contradiction in the Synoptic Gospels, the healing of the centurion’s servant in the Gospels of Matthew and Luke. In the parallel columns below, verbal correspondence is indicated by underlining, while differences are indicated by yellow highlighting; unique material is indicated by turquois highlighting. 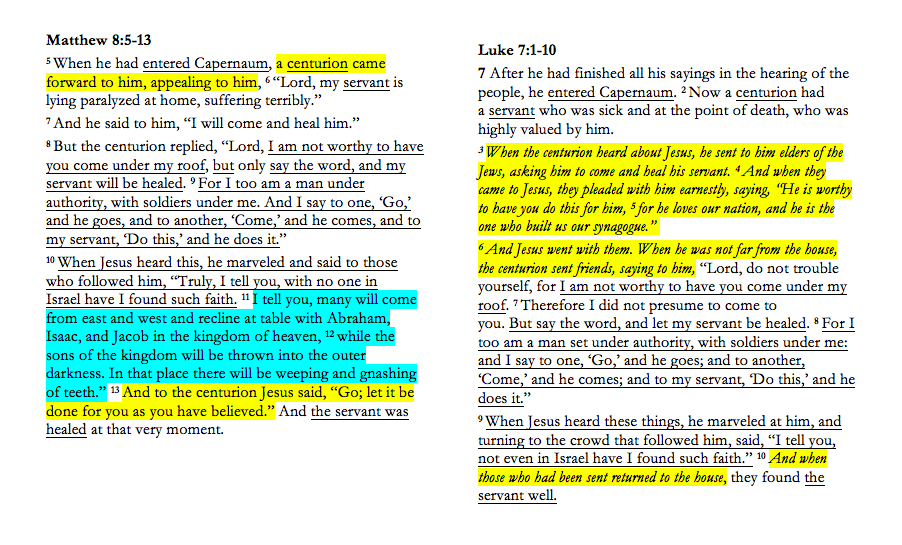 Notice that there is large agreement between Matthew and Luke with regard to the basic narrative sequence and even word-for-word correspondence:

(1) Jesus enters Capernaum;
(2) he is told about a centurion’s servant who requires healing;
(3) he goes to heal the servant;
(4) the centurion conveys to Jesus at some length that he is not worthy for Jesus to set foot into his house;
(5) Jesus marvels at the man’s faith; and
(6) he heals the servant.

We know what happened. It is essentially the same story. The one difference (yellow highlighting) is that in Matthew the reader is led to believe that the interaction between Jesus and the centurion was direct while in Luke it is depicted as being transacted through intermediaries sent to Jesus.

What happened here? This is one of the stories included in Matthew and Luke but not in Mark. Matthew may have been an eyewitness while Luke consulted the accounts of others (Luke 1:2). In addition, both evangelists may have used various sources. Matthew may have abbreviated his source (see, e.g., Matt 8:28-34; 9:2, 18-26; 11:2-3 and pars.) or Luke may have added this detail.

In any case, as a Jew Matthew would have known, and would have expected his Jewish readers to know, that messengers were thought to represent the person who sent them: “A man’s messenger is as the man himself.” In fact, there are other places in Scripture where accounts are condensed by omitting the mention of intermediaries who carried out actions on behalf of others.

The bottom line, therefore, is that Matthew assumed that the centurion sent messengers while Luke explicitly narrated this minor detail. No big deal for their original readers, who would have known that intermediaries were often omitted because they were simply representing the ones who sent them.

If we keep the author’s intent in mind and know the cultural background, we won’t jump to the conclusion that we have a contradiction here but will understand that the accounts in Matthew and Luke are complementary rather than contradictory.

Note: I gave a talk on this topic to the Chris Gardner/Blake Derrick Life group at Providence Baptist Church in Raleigh, NC, on February 18, 2018. To listen to a recording of this talk, please see below. The opening taxonomy is also elaborated upon in a talk I gave at the Dig & Delve conference in Ottawa, Canada. To view a video of this talk, click here. The case study is taken from a blog posted on Michael J. Kruger’s website, “Does the Bible Ever Get It Wrong?”